Kannapolis City Schools (KCS) has been honored with the 2019 Governor’s NCWorks Award of Distinction. The award recognizes the school district’s innovative business collaboration with Wayne Brothers, Inc. and NCWorks—Centralina NextGen Services. The three organizations created the W.I.N. Partnership: Workforce Innovation Nextgeneration. All three organizations received the Governor’s NCWorks Award of Distinction and were honored during a special ceremony in Greensboro on October 24, 2019.

The W.I.N. Partnership allows A.L. Brown High School students to take part in pre-apprenticeships at Wayne Brothers, Inc. During the pre-apprenticeships, they learn skills in the commercial construction industry, which are in high demand. Once students complete the pre-apprenticeship programs, they're eligible to seek permanent employment with Wayne Brothers after high school graduation, and they can receive free college tuition to continue their education. For Wayne Brothers, the program provides a pipeline of skilled employees during a time when there is an extreme shortage of qualified workers in the commercial construction industry.

Kannapolis City Schools’ Director of STEM and Career Technical Education, Daryle Adams, accepted the award on behalf of Kannapolis City Schools. Amanda Roberts of Wayne Brothers and Milton Chicas, formerly of Wayne Brothers, also accepted the award along with David Hollers of Centralina NextGen Services. They all worked together to make the W.I.N. Partnership possible. As part of the award presentation, the NC Governor’s Office shared  a video that highlights the W.I.N. Partnership (see above).

The Governor’s NCWorks Award of Distinction is the second major state honor earned by the W.I.N. Partnership. In April of 2019, one of the graduates of the program, A.L. Brown High School’s Alex Nunez, was honored as North Carolina’s Young Apprentice of the Year. 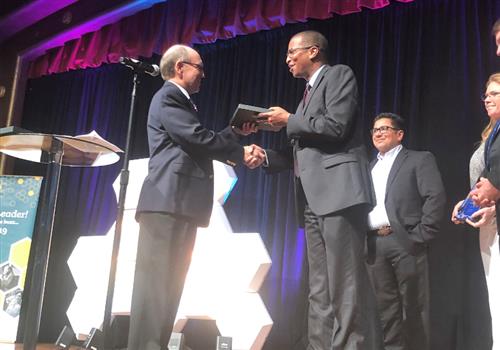