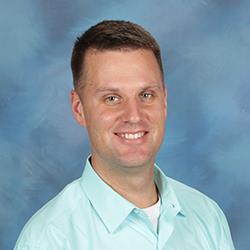 Will Gibson has been a part of Kannapolis City Schools since 2013, now serving as the proud Principal of Jackson Park Elementary School.  Prior to coming to Jackson Park, Will was principal of Shady Brook Elementary.  He also served as an Assistant Principal at Highland Renaissance Academy in Charlotte, Assistant Principal at Newell Elementary School and as a kindergarten teacher at John Motley Morehead Elementary in Charlotte. He began his teaching career way back in 1998 as a kindergarten teacher in Roanoke, Virginia.

Will graduated from Roanoke College in the spring of 1998, and earned a Masters Degree in School Administration from the University of North Carolina at Charlotte in 2005.  He is also married to an educator; his wife Heather teaches Engineering at Mountain Island Middle School in Charlotte.  They are the proud parents of a 7th grader, Jenna, and a chocolate lab named Virginia.